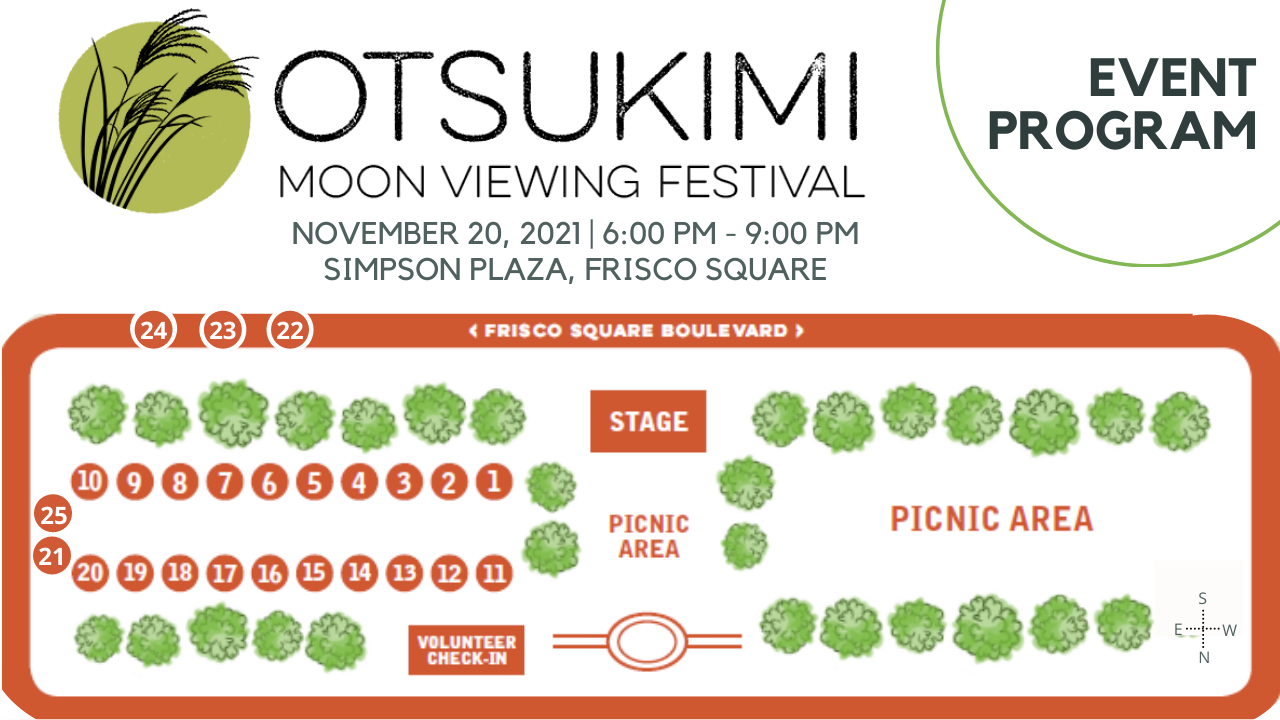 *If the Otsukimi food vendors are especially busy during the evening, we also encourage you to support eating establishments in Frisco Square, adjacent to our event. There are a wide options of choices, and you can explore more at https://www.friscosquare.com.

The Japanese Otsukimi Festival, literally meaning “moon-viewing”, celebrates the Harvest Moon that typically falls on the 5th day of the eighth month of the traditional Japanese calendar. In 2019, Otsukimi falls on Friday, September 13. It is said that the Otsukimi moon-viewing custom was first introduced to Japan by China, during the Heian period. The celebration is culturally important across East and Southeast Asia, where festivities often include outdoor evening picnics, seasonal cuisine, and giving thanks for the bountiful harvest of the year. In Japan, the most important imagery and objects associated with Otsukimi are rice dumplings called Tsukimi-dango, Japanese pampas grass called susuki, various types of farm crops, and, of course, the full moon!

Similar to how in America we often point out “The Man in the Moon” when we look at the full moon at night, the Japanese and various other Asian cultures see the “Moon Rabbit.” The Japanese believe that the Moon Rabbit is pounding rice into a paste that will be made into mochi rice cakes. Ancient Buddhist folklore tells of a virtuous rabbit that gave its life to feed a Buddhist deity disguised as a poor, elderly man. Touched by the rabbit’s selflessness, the deity drew the rabbit’s shape into the surface of the moon where it remains to this day. The tale is said to have given rise to Harvest Moon festivals across Asia. The next time there is a full moon, look into the night sky and see if you can find the Moon Rabbit making mochi!