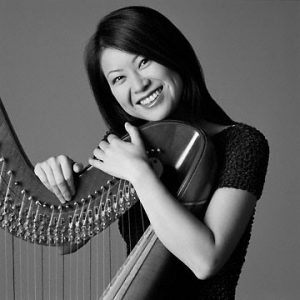 Naoko Nakamura is Adjunct Assistant Professor of Harp at the Meadows School of Music, Southern Methodist University, the Principal Harpist of the Dallas Winds, and the Acting Principal Harpist of The Dallas Opera. Since 1998, she has maintained an active performing and teaching schedule in the Dallas-Fort Worth area. She is an active chamber musician, having appeared at the “Cliburn at the Modern” series, the Fine Arts Chamber Players in Dallas, the Chamber Music Society of Fort Worth, and the Chamber Music in the Galleries at the Crow Museum of Asian Art. As a soloist, she has invited to perform in Japan, Hondura, Peru, and Costa Rica. At the Oberlin Conservatory of Music, she earned a Bachelor of Music degree in both Harp and Piano under the tutelages of the renowned harp pedagogue, Alice Chalifoux. She received a Master of Music degree in Harp Performance from the Shepherd School of Music at Rice University under the direction of Paula Page. 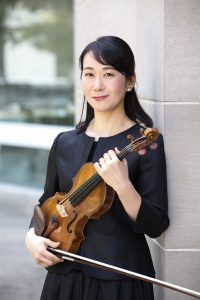 Violinist Kaori Yoshida, is a member with the Dallas Symphony Orchestra since 2006. Before coming to Dallas, she was a member of the Honolulu Symphony and New Haven Symphony Orchestra. She has also performed and toured with the Pittsburgh Symphony Orchestra, New York Philharmonic, Orchestra of St. Luke’s. As a chamber musician, she has performed with Voices of Change and also performed in several ensemble groups, including the Fine Arts Chamber Players. A native of Japan, Kaori earned her bachelor’s degree from the Toho Gakuen School of Music and received both master’s and artist diploma degrees from Yale University. 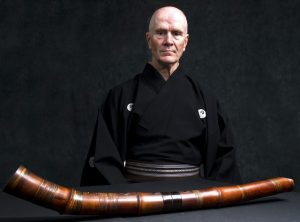 Stan Richardson has studied the Japanese flute and travels extensively as a practitioner and teacher of the shakuhachi flute as meditation. He became interested in ethnic music from the spiritual traditions of Japan and China and in 1972 began study of the shakuhachi. He has recorded with the Turtle Creek Chorale and tours regularly around the United States. He has also performed throughout Japan with members of the Ki-Sui-An Shakuhachi Dojo. He is one of only four master teachers in the United States, an achievement that took a decade to earn. He has 10 students and is fluent in reading and writing Japanese music. His own study under teachers Ronnie Seldin and Japan’s Yoshio Kurahashi has resulted in performances in Sydney, and repeat trips to Japan to play during the World Shakuhachi Festival.

Stan currently resides in Dallas, Texas, where he teaches in his own small dojo. In the Dallas area, he has performed at the Dallas Museum of Art, with the Dallas Symphony Orchestra, and alongside world-renowned cellist Yo-Yo Ma. Richardson’s two albums, “Moon on the Water” and “Shakuhachi Mediation Music,” which sold more than 100,000 copies, have amped up the U.S. following for this beautiful but otherwise obscure form of music. He is also skilled with guitar, violin, viola, and Chinese and South American flutes.