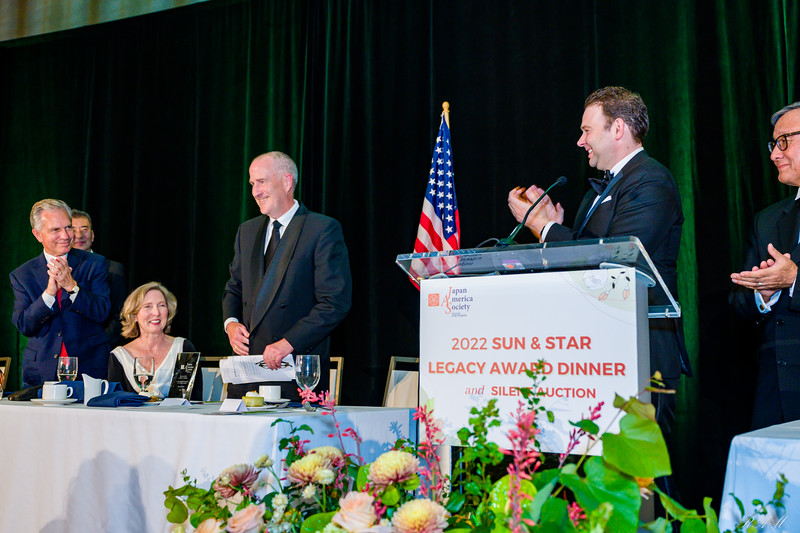 This was return to the event’s normal springtime schedule. The 2019 award dinner took place in May and the 2020 event was postponed until October 2021 due to the COVID pandemic. This iteration of the annual dinner raised nearly $280,000 through sponsorship, ticket sales, special contributions, and the silent auction. The funds will support the Society’s educational, cultural, business, public policy, social, and language programs that further mutual understanding between Japanese and Americans in North Texas. Platinum sponsors included ORIX Corporation USA and Toyota Motor North America.

Almost 400 guests from large corporations, small and medium-sized enterprises, and civic organizations were in attendance, making this the Society’s largest non-festival gathering since 2019. The Honorable Hirofumi Murabayashi, Consul General of Japan in Houston, was making his first appearance since coming to his new post, and he offered a toast, before passing the program to master koto musician, Masayo Ishigure, who delighted the audience with her majestic melodies before dinner. This year’s culinary selection started with a salad of spinach frise and baby red oak greens with poached pear and a creamy lemon dressing, a main course of BBQ braised beef short rib paired with miso and sriracha glazed salmon, and desserts of guava and pistachio tart or matcha mint cheesecake. Floral arrangements at the podium were generously contributed and expertly crafted by Amira Matsuda.

JASDFW American First Vice President Harry Whalen introduced 2022 Bridges-to-Friendship award recipient, Hideto Nishitani, who highlighted the many people in his life who led to his success and those who greatly influenced him, such as Tadashi Yamagata and Senator Danuel Inouye. Mr. Nishitani also told a memorable tale of his role in returning a World War II flag to a family in Tochigi Prefecture, a story that highlighted the friendship the U.S. and Japan have built over the past 75 years. Following his remarks, JASDFW President Grant Ogata shared the Society’s key recent accomplishments and introduced 2022 Sun & Star Legacy Award recipient Sean Donohue. During his acceptance, Mr. Donohue focused on the achievements of 2,000+ employees of Dallas Fort Worth International Airport and their hard work to strengthen bonds between Japan and the United States. Videos produced by Kosuge Productions highlighted the award recipients’ impressive careers.

The Sun & Star Legacy Award is presented each year to a distinguished leaders who have enhanced the relationship between the peoples of Japan and the United States. The award is named for the Sun & Star Festival, which brought Japanese art and culture to Texas for three months in 1996. “Sun & Star” refers to Japan’s Rising Sun and the Texas Lone Star, symbolizing friendship between Japan and Texas. Recent past Sun & Star Legacy Award recipients include The Honorable Kenichiro Sasae, Ambassador of Japan to the United States from 2012 to 2018, and his wife, Nobuko, conference interpreter and founder of Nobuko Forum Japan; Irene Hirano Inouye, founding President of the U.S.-Japan Council; and Governor Hideaki Ohmura of Aichi Prefecture in Japan. The Bridges-to-Friendship Award is given to a local individual or organization for fostering friendship and understanding between Japanese and Americans in North Texas. Recent and past recipients of the Bridges-to-Friendship Award include Anna McFarland, former Executive Director of the Japan-America Society of Dallas/Fort Worth, Dallas Kiyari Daiko, a local taiko drumming group with over a quarter century of history, and Shinsuke Takahashi, Chairman of the Board and Head of Government Relations at NEC Corporation of America.

The 25th annual Sun & Star Legacy Award Dinner is scheduled for Thursday, April 27, 2023 at the Omni Frisco Hotel. Additional information will be released in fall 2022.