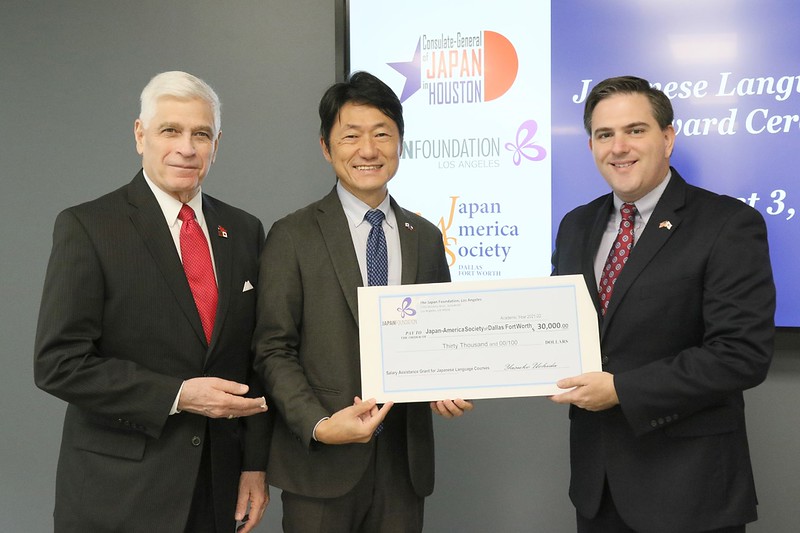 On August 3, the Honorable Hideo Fukushima, Consul-General of Japan in Houston, visited the Japan-America Society of Dallas/Fort Worth (JASDFW) to deliver “The Salary Assistance Grant for Japanese Language Courses,” awarded by the Japan Foundation, Los Angeles (JFLA).

JASDFW is launching new Japanese language courses this year in response to strong demand from members and the local community. The Society applied for a JFLA grant that provides partial support for the salary of its Japanese language instructors. The application was successfully approved, and Consul-General Fukushima presented the check to JASDFW on behalf of the Japanese government.

Consul-General Fukushima congratulated and thanked JASDFW, saying, “Language is the most symbolic and effective tool for understanding culture, and learning Japanese will lead to a deeper understanding of Japan. As the Tokyo 2020 Olympic Games continue to heat up, a variety of cultural information about Japan is being introduced through TV broadcasts, and many people are thankfully taking an interest in Japan, the launching of this course is so well timed.”

Paul Pass, Executive Director of JASDFW, shared his thoughts on the value of language education, “Through studying Japanese, students develop a greater comprehension of the Japanese culture and its beautiful way of life. Knowledge of Japanese also allows them to connect with new friends, gain new perspectives, and seek out unique opportunities both at home and abroad. Learning a new language is also proven to expand cognitive functions, such as

decision-making skills. Japanese is the language of anime and manga, two artforms that have global appeal, and choosing to learn Japanese demonstrates a willingness to take on challenges, given that is certainly not the easiest language to master.”

Courses in 2021 will be conducted online due to on the ongoing effects of COVID-19, but JASDFW plans to offer Japanese language classes for students at many ages and experience levels, including adult courses (beginner, intermediate, and advanced), kids’ courses for ages 9-13, summer programs, and special workshops. Classes already started in the spring with 30 students being served thus far. JASDFW will host its next class in September and has plans for expansion in late 2021.

Limited spots are still available for the next course, beginning September 16. To learn more about the Japanese Language Class and future offerings, click here.