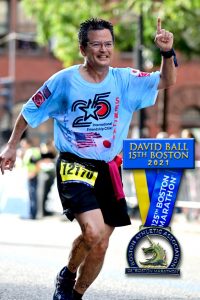 Long-time Japan-America Society of Dallas Fort Worth (JASDFW) friend and volunteer David Ball recently ran his 15th consecutive Boston Marathon and, in the process, raised awareness for the Dallas-Sendai connection. A North Texas native, Ball’s mother is from the Japanese city of Sendai, which became an International Friendship City with Dallas in 1997.

David is a runner with over twenty years of veteran marathon experience. He has also completed the three U.S.-based Six Star marathon majors (Boston, Chicago, New York) and has goals to run the remaining three (Berlin, London, and Tokyo). His wish is to have the Six Star medal in his hands as a symbol of the dedication and commitment necessary for the biggest and best marathons in the world.

His passion for running goes beyond his own personal ambitions and contributing to the community is an integral part of his character. He chose to highlight the coming 25th anniversary of the Dallas-Sendai relationship through his Boston Marathon jersey, donning a stylized “25” with a star and sun, the respective symbols of Texas and Japan, and the flags of the U.S. and Japan. David also recognized Sendai in 2011, soon after the Great East Japan Earthquake and Tsunami.

“In 2011, I decided to fundraise at the Boston Marathon for the Japanese Earthquake and Tsunami Relief Fund because my mother’s side live in Sendai, the Japanese city that was hit. They were missing for several weeks, so I did what I could to help. Dallas is the international sister city of Sendai and the people of my area in Texas donated a huge amount. My family was eventually accounted for; all survived. Japanese spectators along the Boston course wept and cheered with joy when they saw my Japanese American shirt running down the street.”

The Japan-America Society of Dallas/Fort Worth is honored that David chose to showcase Dallas and Sendai during his most recent participation in a globally recognized event. Dallas and Sendai became International Friendship Cities when Mayor Ron Kirk and Mayor Hajimu Fuji signed a formal agreement in August 1997. Since then, JASDFW has supported exchange activities for high school students, athletes, and distinguished community leaders. It is thanks to citizen ambassadors like David Ball that the relationship between our two cities and countries grows stronger each year.

His 2021 running of the Boston Marathon also turned out to be a story of perseverance when the assigned bus driver became lost, resulting in beginning the race 40 minutes late and a steep uphill climb to the start line that wasted precious energy on a humid day.

“Despite all the negatives, I took a long moment to emotionally shelve my thoughts and change my mindset to only positivity and determination to run my very best with the strength I had left [and I] persevered to that beautiful finish line!”