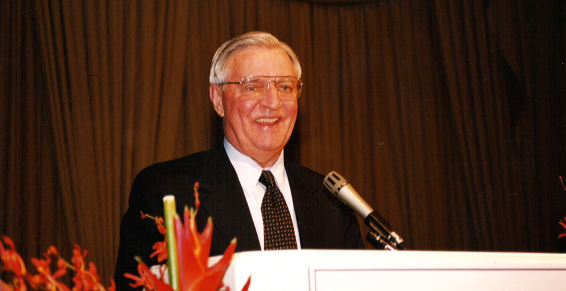 Mondale was born in the small town of Ceylon, Minnesota in 1928. He served in the U.S. Army from 1951 to 1953, after which he graduated from the University of Minnesota Law School and eventually became the Minnesota Attorney General at the age of 32. He would continue to serve his home state at the federal level as a U.S. Senator from 1964 to 1976. While in the Senate, he championed consumer protection, housing equality, tax reform, and desegregation of schools. The pinnacle of Mondale’s domestic political career came in 1977, when he was inaugurated as the Vice President of the United States, serving with President Jimmy Carter. He was also the Democratic nominee for U.S. President in 1984 and although he was not victorious, his choice of U.S. Representative Geraldine Ferraro was historic. She was the first female nominee as vice president on a major party’s national ticket.

He was called back to public service in 1993 as the Ambassador of the United States to Japan, a post which he would hold until 1996. Mondale’s tenure as ambassador included working with four separate Japanese Prime Ministers, offering U.S. assistance to help Japan after Kobe’s Great Hanshin Earthquake in 1995, and the Hashimoto-Mondale Agreement, which aimed to reduce the U.S. military presence on the island of Okinawa. In 2008, the Japanese government awarded him the Grand Cordon of the Order of the Paulownia Flowers for his contributions to enhancing mutual understanding and friendship between the U.S. and Japan.

In 1998, Mondale was the first recipient of the Sun & Star Legacy Award, the Japan-America Society of Dallas/Fort Worth’s highest honor. His awarding set a precedent for high-level honorees, such as U.S. ambassadors to Japan, ambassadors from Japan to the U.S., CEOs and presidents of major global companies, and a prime minister of Japan. JASDFW will recognize Ambassador Mondale and his role in U.S.-Japan relations during the upcoming 2021 Sun & Star Legacy Award Dinner.