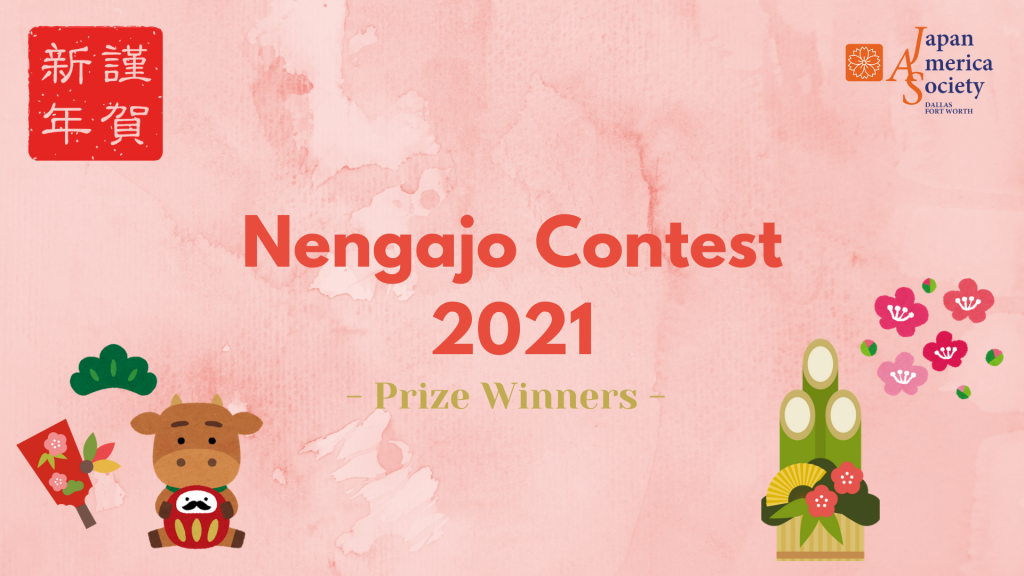 January 1st is the Japanese New Year (We call this oshogatsu), and it is a very special holiday in Japan. People take off the first three days of the year to celebrate with family reunions and traditional rituals. During this time, they welcome Toshigamisama, believed to be the god of the harvest and prosperity.

Oshogatsu is not the Lunar New Year.
Oshogatsu is different from the Lunar New Year. Since 1873 in the Meiji era, the official New Year has been moved to January 1st in an effort to modernize Japan, instead of the New Year based on the lunar calendar. However, Japan still celebrates the zodiac animal connected to each year, such as the ox (牛, ushi) in 2021.

This reminds you of Thanksgiving or Christmas holidays, doesn’t it? Similar to the custom of sending Christmas cards, in Japan, there is a tradition of sending new year’s greeting cards, called nengajo.

Nengajo are greeting cards sent during the New Year in Japan. They are commonly exchanged between friends, family, neighbors, and businesses who had good relationship they had during the previous year and to express their gratitude in the hopes of preserving good relations in the year ahead.

When the post office began issuing postcards during the Meiji period, it became a more convenient way of sending nengajo and widely spread. This custom still exists, even though people now turn to the Internet, social media, and messaging apps.

Typically, the nengajo design is the zodiac of the upcoming year – 2021 is the year of Ox!

Since 2009, the Japan America Society of Dallas/Fort Worth has hosted a nengajo contest. This is a statewide competition for students learning Japanese at middle schools, high schools, and colleges in Texas. The main purpose of this contest is to provide the opportunity to explore the history and custom of sending nengajo at New Year’s.

Thank you to the teachers and students who participated in the 2021 contest. Today, we are happy to announce this year’s winners! 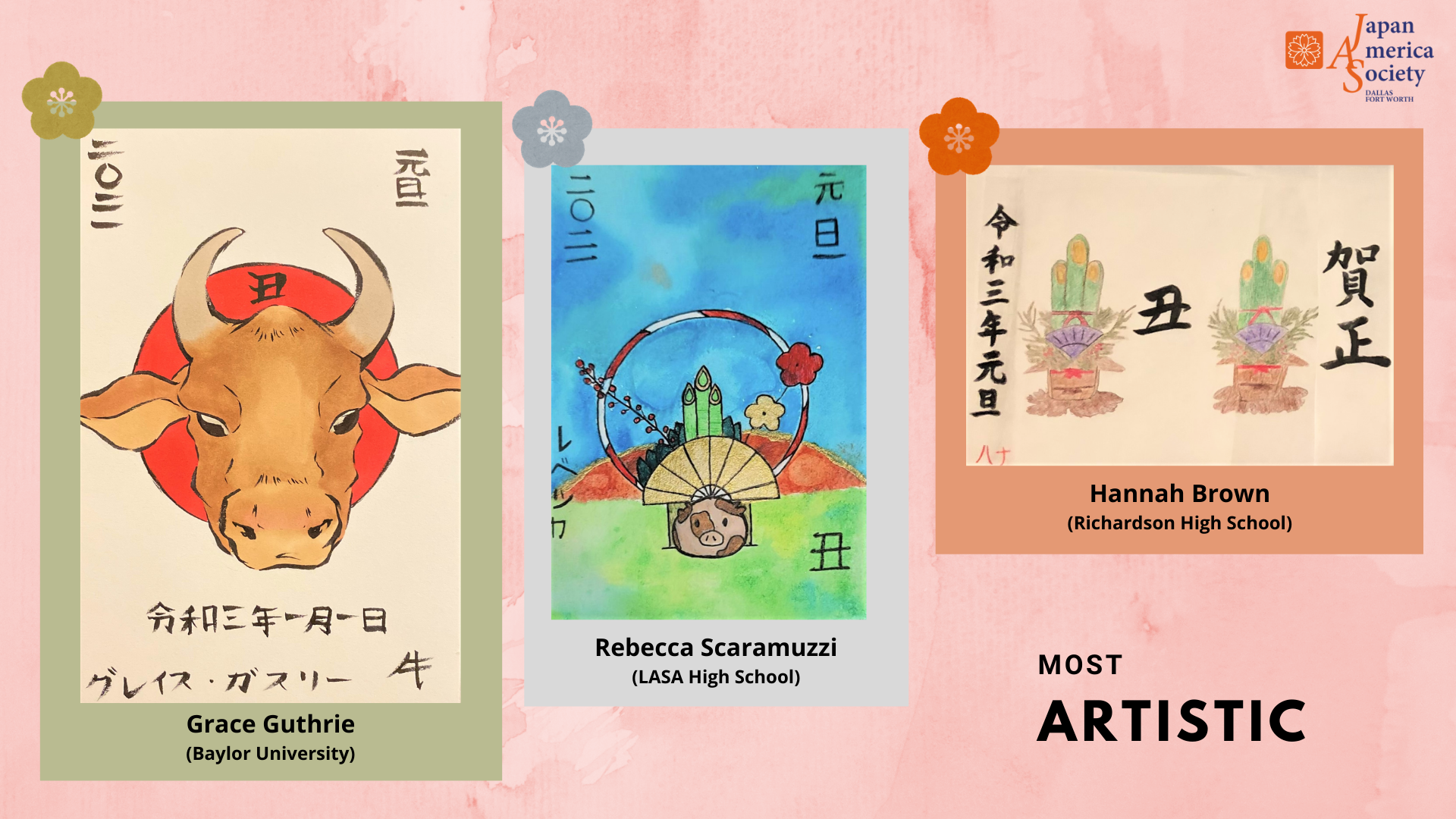 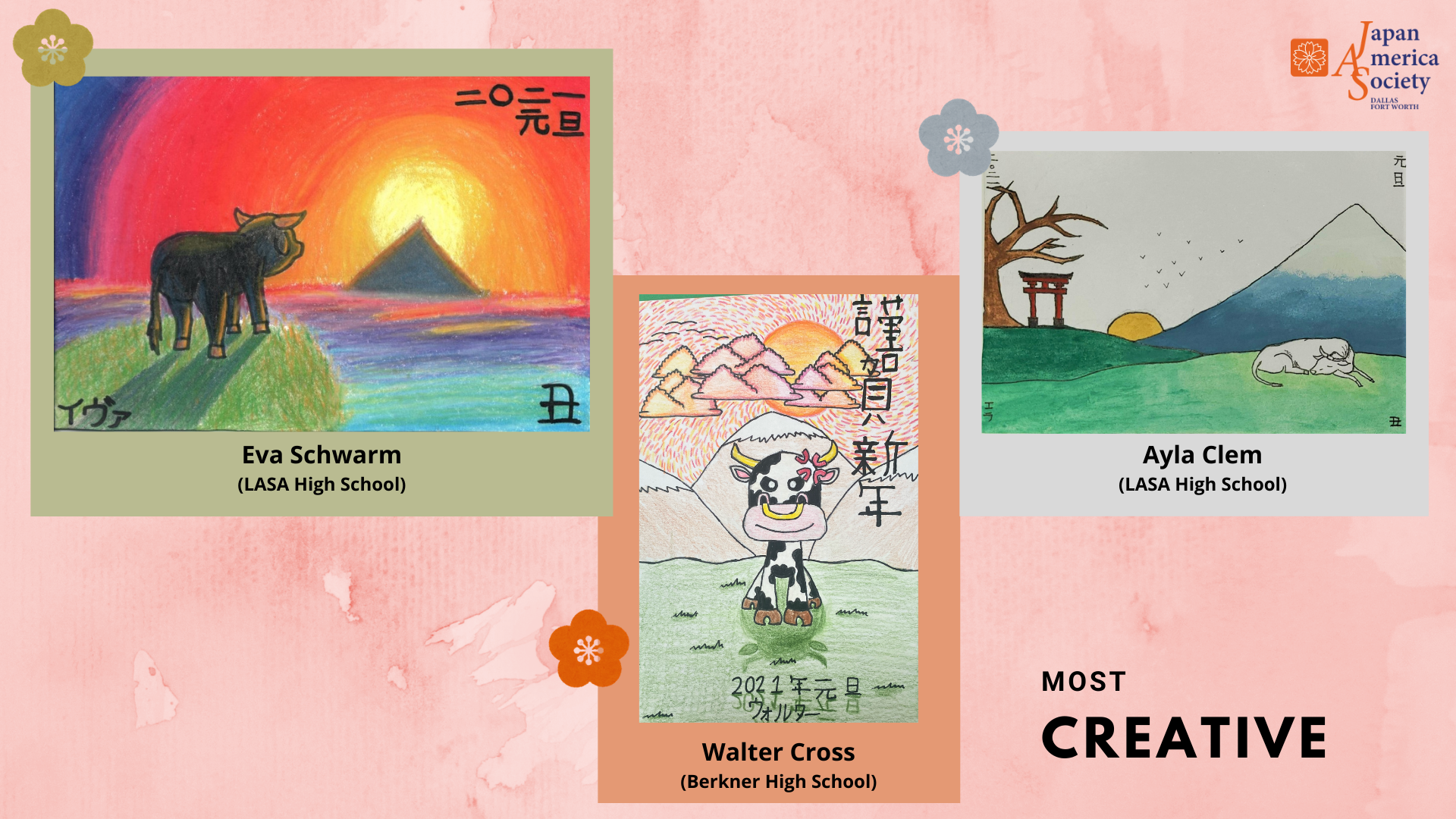 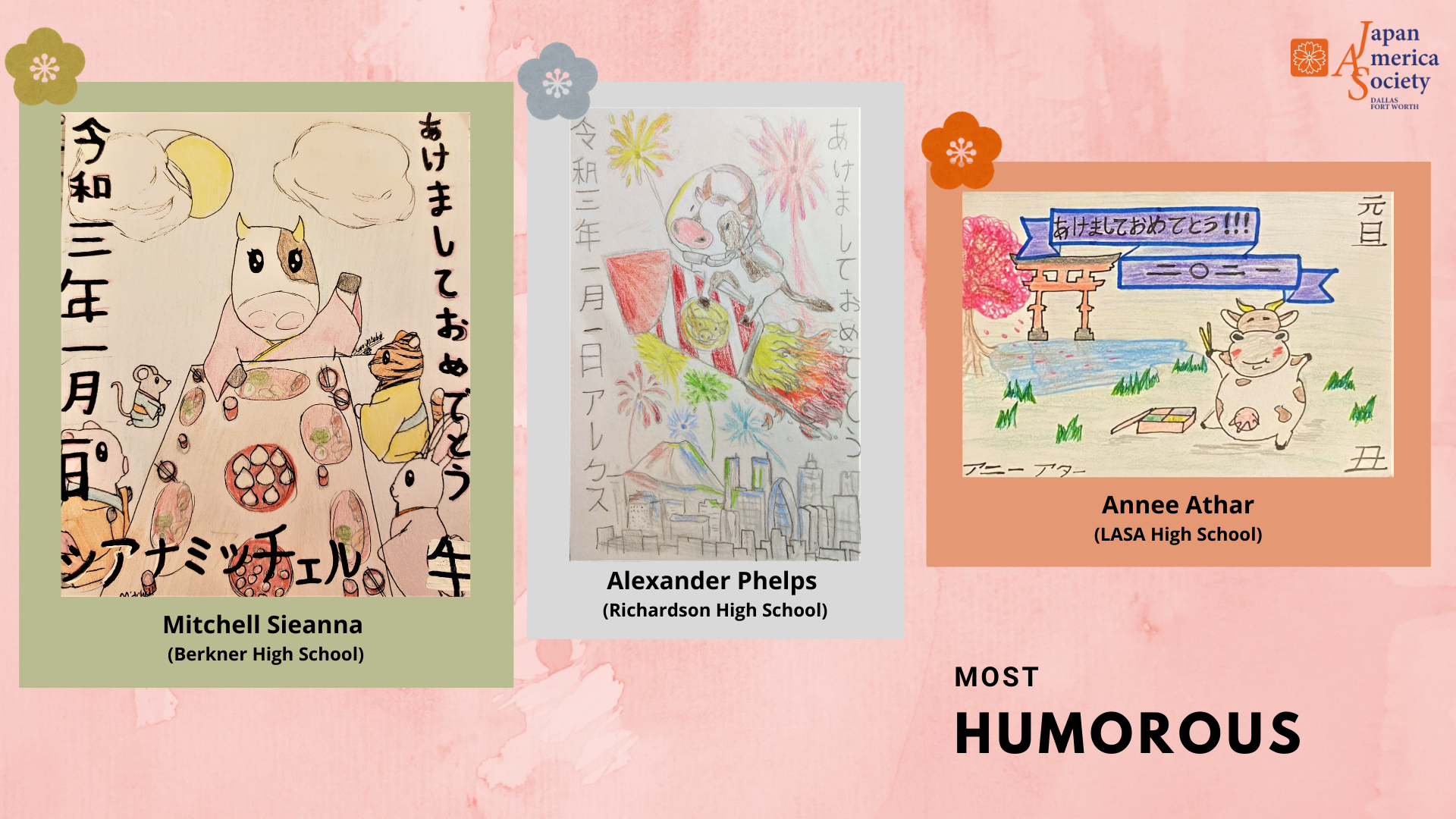 In this year’s contest, there are some outstanding works that embody the spirit of a new year in a simple, but refined, minimalistic artistry. The ones I chose for the best 3 in artistic and creative works distinguished themselves in execution of different techniques of art. They were very well thought out to convey the happy, serene, and promising spirit of the Japanese New Year.

It was impressive to see these students understand well the nuance of the Japanese New Year and they depicted it beautifully in each Nengajo.

2021 is the year of “Ox.” It symbolizes hard work with patience, ploughing the field step by step, expecting the seed sprout before harvests.  Looking at all the contestants’ happy cow drawings, I am assured 2021 will be a great beginning.

We also have a display of all nengajo submissions. Please visit here

The Japan-America Society of Dallas/Fort Worth remains committed to providing quality programs in arts and culture, education, business, public policy, and international exchange, and creating opportunities for friendship and meaningful interaction. If you would like to know more about our school cultural outreach program, please visit the Japan-in-a-Suitcase page

We are offering special Japan-in-a-Suitcase programs online starting in Spring 2021.