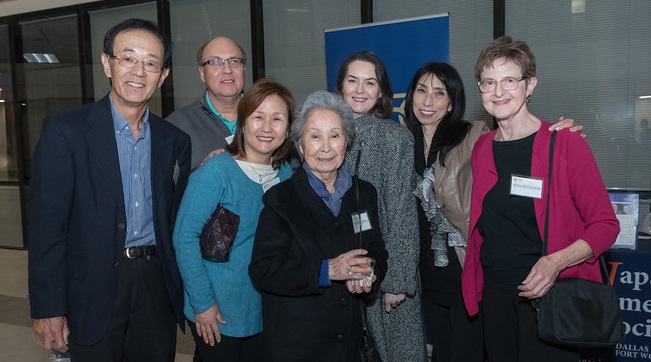 PLANO, March 30, 2020 – The Japan-America Society of Dallas/Fort Worth made a strong start to its 50th anniversary season in early 2020. Signature events and programming showcased the organization’s dedication to mutual understanding and ongoing engagement between Japanese and Americans in North Texas. Featured events included the 20th annual Mochitsuki New Year’s Celebration; a special 50th Anniversary Kickoff Reception; and the annual Japan Currents Symposium.

To both commemorate the golden anniversary and to welcome its members and board to new offices at Central Five Hundred in Plano, the Japan-America Society of Dallas/Fort Worth hosted a 50th Anniversary Kickoff Reception on Thursday, February 6. This invite-only event for approximately 100 people included a catered sushi bar and curated sake selections, special remarks by past board presidents, and a presentation outlining the past, present, and future of the Society. Charter members from 1970 in attendance included Dr. Masashi Kawasaki, who also served as Honorary Consul General of Japan in Dallas, and his wife Janice, as well as Shigeko Takamatsu, Shohei Takamatsu, and Milton Thomas. Past board presidents joining the event included Judith Becker, John Bowers, Elaine Browning, Don Casey, Curtis Harris, Sam Shichijo, and John Stich.

The annual Japan Currents Symposium on Thursday, February 13, at the Dallas/Addison Marriott Quorum. Held each year since 2014, this program (previously known as the Japan Update Symposium) brings leading thinkers from both Japan and the U.S. to explore current and future issues that affect the critically important bilateral relationship. This year’s theme was “The Business and Diplomacy of Baseball in U.S.-Japan Relations” and was inspired by the upcoming Summer Olympic Games in Japan.

Ambassador Ryozo Kato, former Ambassador from Japan to the United States (2001-08) and former Commissioner of Nippon Professional Baseball, gave opening remarks on his years as a baseball enthusiast and the importance it played in his career as a diplomat. After completing his remarks, a lunch panel convened on the stage. The luncheon program featured speakers Ambassador Kato; Dale Petroskey, President and CEO of the Dallas Regional Chamber and former President of the National Baseball Hall of Fame and Museum; and Ambassador J. Thomas Schieffer, former Ambassador from the United States to Japan (2005-09) and former President of the Texas Rangers Baseball Club. Dr. Hiroki Takeuchi, Associate Professor of Political Science and Director of the Sun & Star Program on Japan and East Asia in the Tower Center at Southern Methodist University, moderated. All speakers shared how baseball presented an opportunity to build relationships with business leaders and politicians, namely former President George W. Bush.

Fitts shared stories about the first trailblazers of Japanese players in the U.S., as well as Americans in Japan, including the talented athlete Wally Yonamine. Gomi discussed the role of technology in baseball and how NTT is partnering with Major League Baseball on new high-definition experiences, creating an environment similar to attending a game while being hundreds or thousands of miles from the stadium. Morris commented on the Texas Rangers’ work with the Japanese community and media when star pitcher Yu Darvish was on the roster, as well as what the Rangers are doing now to engage with Japan. Murton told the audience of his time playing professional baseball in both the U.S. and Japan, where he broke a Nippon Professional Baseball record for single-season hits, previously held by Ichiro Suzuki. He also shared his observations of how baseball can build bridges between cultures.

As the Japan-America Society looks forward to the rest of 2020 and beyond, its commitment in continuing to provide dynamic events for all ages in the North Texas community. This fall, the JASDFW will host its annual Sun & Star Legacy Award Dinner at the Omni Frisco Hotel. Ambassador Kenichiro Sasae and his wife Nobuko Sasae will be honored with the Sun & Star Legacy Award and former JASDFW Executive Director Anna McFarland will receive the Bridges-to-Friendship Award. Visit http://jasdfw.org/events/list/ and http://jasdfw.org/jasdfw-celebrates-50th-anniversary/ for updates and more information about all programs.