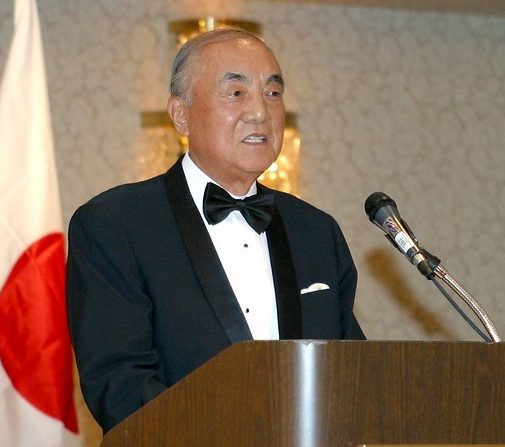 The board of directors and staff of the Japan-America Society of Dallas/Fort Worth is saddened to hear of the passing of Former Prime Minister of Japan, Yasuhiro Nakasone.

He died on Friday, November 29, 2019 at the age of 101. A contemporary of U.S. President Ronald Reagan and British Prime Minister Margaret Thatcher, he served Japan as Prime Minister from 1982 to 1987. Nakasone governed Japan during a time of extraordinary economic growth for the country and also pushed for educational reform. He was the oldest living former country leader at the time of his passing.

Born on May 27, 1918, in Takasaki (Gunma Prefecture), Nakasone attended Tokyo Imperial University before joining the Japanese Interior Ministry and then the Japanese Navy, where he served as a lieutenant commander during the Second World War. In 1947, he won a seat in Japan’s parliament, becoming the youngest member of the House of Representatives at age 28. He would later serve as the Minister of Science, Minister of Transport, Director General of the Japan Defense Agency, and Minister of International Trade and Industry, as well as becoming an icon in the Liberal Democratic Party (LDP).

After his premiership, he would remain in the National Diet until the early 2000s. Nakasone was also supportive of many organizations that promoted strong Japan-U.S. relations, including the Japan-America Society of Dallas/Fort Worth. Beginning in 2004 he served as a member of the Society’s Advisory Council.

“Mr. Nakasone was a complex person whose head was full of ideas and vision for Japan. (He was) a global thinker and a little know fact is that he was a founder of Children’s International Summer Village, an exchange organization for youth promoting world peace,” said Nakasone family friend and long-time JASDFW member Randy Winski.

She added that, “Prime Minister Nakasone’s impact on both domestic and international affairs is still felt today, and he will be missed.”